While I had the chance to share a house with awesome roommates, I had some problems with my landlord (who was also living there) which made me leave the house (well, it was also a good excuse to get closer to work).

As I said in a previous article, I already had wandered through Facebook pages and Dutch websites before coming to the Netherlands but I heard from an agency which rent only to students or workers with relatively low wage (2800€/mo gross) at a rather interesting price.

This agency is DeKey and its website is destined to expats willing to stay in Amsterdam for several months. The deal is simple, you leave the appartement in the condition you entered it. Not noisy (well, it's still a student housing but when it's momderate, it's okay).

For 2 months and a half, I lived in an appartement rent by DeKey for a bit less than 500€/month in containers (yes, containers) in Stavangerweg (West side of Amsterdam, near the IJ river). It was a small (20-25m²) room with a bathroom, kitchen and few furnitures: bed, fridge, desk and shelf. The thermal isolation is surprisingly good as opposed to sonor isolation which is not satisfying, but hey! we can't get everything! For the rent and the location, it is a very good deal. Of course, there are other rooms to rent, not only in containers but I could not visit or live in an other room rent by DeKey.

This housing is supposed to be for short stays. 6 months for students, renewable once and only once. You can always ask as I did for an even shorter stay, but you'll be redirected to an other service. If you're already in Amsterdam, visit them at their office or you can contact them by mail (do not hesitate to spam them, they're not really responsive).

For students: fill the form and contact them at least 3 months in advance, appartements are very difficult to have. Some even have a queue for several years!

One of the other reason to chose these appartements is that you can have your BSN (see previous article) and because you'll live alone, you can ask for governmental financial help for paying your rent (up to 180€/month for students!). Be patient for that, it really takes a long time and a lot of papers to give. But hey, free money!

After having found a job or while seeking one, it is always a good idea not to be homeless. There exists two different options, one being more temporary than the other:

This solution is only of interest if you're staying for few days or to avoid being homeless, the price per night is pretty expensive. Count on 100-150€ per night in the center of Amsterdam during summer or holidays.

However, if you're a bike fanatic, you could go to "Hello, I'm local" which is an hour and half away from Amsterdam center. Situated in Haarlem, the night costs around 30-40€ in a 14-beds dormitory and the owners are lovely. If you're coming by car, you could have a chance to park it in one of those few free parkings nearby.

Anyway, even if you don't chose to stay in Haarlem, definitely take some time to visit the city, it's worth a look :) 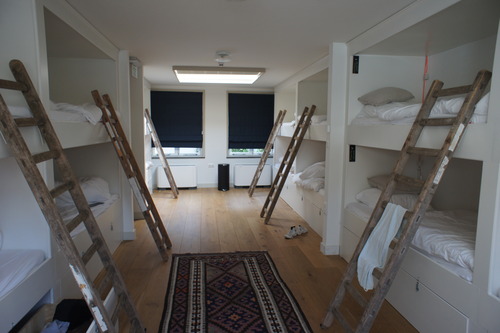 As I said, you don't want to stay too long in a youth hostel. It's expensive and you need a bit of privacy, don't you think?

So, now you're looking for a room or an apartment to rent or to share. Again, you've two possibilities: illegaly renting an apartment/room (only for the government, I'm not suggesting you to squat an apartment !) or register yourself at the Town Hall.

However, you can only register if the landlord gives you a rental contract (which is quiet uncommon for cheap places).

Why is it so important? you ask. You have to know that most employers, all banks and some organisms can ask you your BSN (or ex-SOFI number) which is given to you after you've been registered at the Town Hall. Without this BSN, no bank account, which means no public transport abonnement, no mobile subscription, no appartement insurance, etc. I will explain all that in a next article.

How would you know the apartment you're interested in is registrable? Appartement hunting websites and landlords often mention "registration" (kijkavond in Dutch) in their ads. The apartments or rooms that are registrable are often more expensive, due to taxes (on wastewater, wastes, ...) being applied on the number of tenants. You cost them money so I guess it's fair to charge you more.

However, it is rare to find landlors which accept you register for a period of less than a year. The reason is simple: once registered, the landlord cannot unregister you until the one-year anniversary date of your registration. If you forget to unregister, the landlord will pay the taxes for a person which is not renting the room or apartment anymore.

Do not spit on "illegal" rentals, it can save you from homelessness at a way lower cost than youth hostels.

Where to find apartment to rent

Some (paid) websites do their business on it. I passed most of my time on Kamernet and Kamertje which ask you a 30 to 40€/month fee to contact landlords. I (shamefully) paid a two-weeks abonnement to Kamernet and sent around ten mails. 7 were replied to but all turned out to be scams :(

The second possibility is to ask agencies to find you an apartment or take an apartment managed by an agency. Most of them have many apartment to rent and allow you to register. However, be careful, like in France, some agencies sell lists of available apartments which are, of course, for 80% of them, already rented. It is an almost mandatory to deal with agencies if you want an apartment in the center.

The last option is to use social networks, Facebook being the most popular for rentals. There exists a big number of pages linking hunters and landlords and that is how I found my room. Those are the two pages I consulted: https://www.facebook.com/groups/Amsterdamapartmentrentals/ and https://www.facebook.com/groups/amsterdam.apartments/. Don't be fooled, there are a lot of demands and few offers which offers a beautiful playground to scammers.

For a small room in a big shared apartment, count on 600-800€ per month outside of the center, more than 1000€ per month in the center. Are you looking for an apartment for yourself only? Be rich and lucky or you'll find nothing.

How not to be fooled by scammers

How to prevent being scammed? Demand to visit the apartment, do not send money. Check the mail address on Google or on scammer hunters websites. Check pictures with Google: